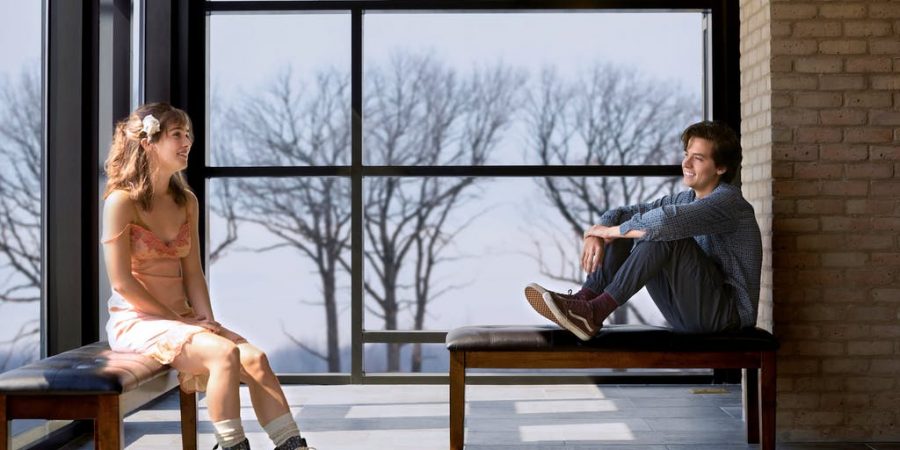 I am a movie crier. There’s no sugar coating it. I cried my way through Midnight Sun, Collateral Beauty, and even Instant Family with Mark Wahlberg jerked a few tears. So, of course, a movie about two teenagers in that fall in love but can’t be together because of a disease was bound to leave me in tears. Yet, almost two-thirds of the way through the movie my eyes were dry.

Five Feet Apart, based on the #1 New York Times bestselling novel by Rachael Lippincott, follows the story of two patients with cystic fibrosis, a genetic disorder that causes mucus to form in the lung which blocks the airways and makes it hard to breathe. In general, individuals with cystic fibrosis, or CFers as they are referred to in the movie, are supposed to stay six feet apart from one another to prevent spread of bacteria. Yes, notice how I said SIX, not five, like the name of the movie.

Haley Lu Richardson plays the female lead Stella, the perfect personality to balance out the serious tone of the plot. From the very beginning, she was likeable and I wanted to somehow save her from a life plagued with a chronic illness. That was what made the movie so difficult to accept and tugged on my hardstring viciously. I could just as easily see this girl at a high school dance or graduating college but instead she was stuck within the walls of a hospital.

On the other hand, heartthrob Cole Sprouse played Stella’s opposite, Will. Everything that Stella was, Will, for lack of better words, wasn’t. He didn’t care about saving his own life, in fact, he had seemed to accept the death sentence that came with the disease. Enter, Stella, who was going to save his life whether he liked it or not. I’m not going to lie, the way these two were thrown together was a little bit a stretch. Stella has obsessive compulsive disorder, and due to her OCD she latches on to Will’s medical plan and feels the need to fix it. The two start doing their regimens together everyday which is actually surprisingly sweet.

All of this is nice but pretty standard to the plot of every other romance movie. And of course, there needs to be a best friends and love life consultant of the girl. This character was, and I’m not even exaggerating here, my favorite one out of the whole movie, Moisés Arias, who played Poe, and although he was a CFer as well, he brought a comedic relief to the tragic plot. The tears came at the very last minute but his character brought a nice sense of humor to the quite serious theme. I would almost call his character the cupid of the movie, providing comfort to both characters and in the end pushing them together.

By the end of the movie, tears were streaming down my face but had only come in the final scenes of the movie. To be fair, I did appreciate this optimistic spin on a love story that could only end in a bad way however I wish that they had dragged the end out longer. It seemed like it was all happy, happy, happy and then boom sad. And when it was sad, it was sad in every way possible. The one major flaw I did find was I still had questions left about the future of the characters.

In the end, the movie is a emotional love story from a new angle that I would say everyone needs to see. It’s the perfect mixture to leave you rooting for the two to be happy in the end. Just like the number in the title, I’m going to give this movie FIVE stars.