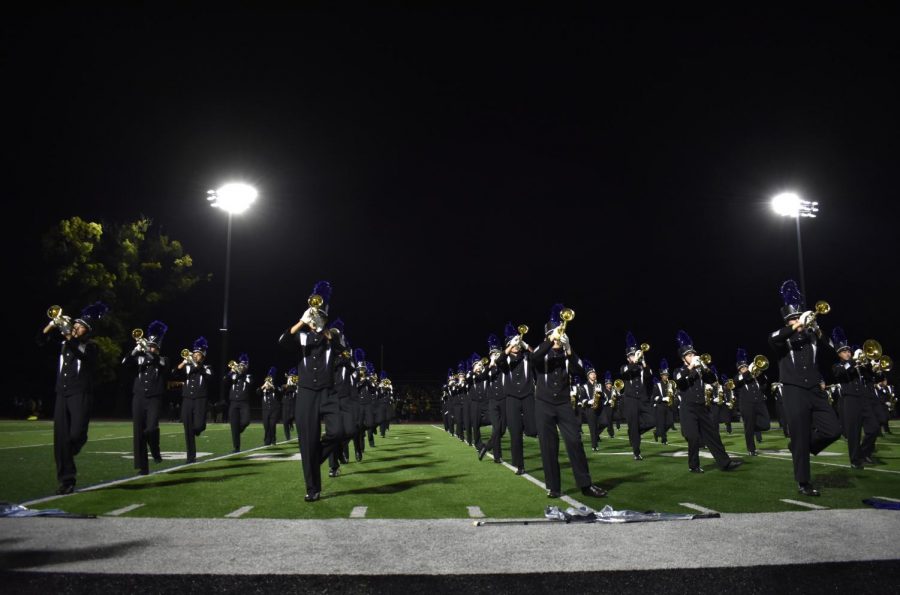 The lights shone brightly on the football field on October 7 as the marching band took the field for their biggest performance of the 2019 marching season. This was the night of the Michigan School Band and Orchestra Association (MSBOA) Marching Band Festival, where marching bands from numerous schools travel to a host school and perform their halftime shows.

This year’s annual Festival was hosted at Bloomfield Hills High School, with many schools coming in from around the area to showcase their halftime performances, including the Groves marching band, the Southfield A&T marching band, the North Farmington marching band, and many more. Throughout the night, bands received feedback after performing their shows, as well as an overall performance grade. The grading scale is a simple 1-5, a 1 being the best score a band can earn.

“It was very difficult to march out in the sun, rain, and snow for five days straight, as well as [in] Wednesday night rehearsals in preparation for Festival,” said sophomore clarinetist Anjalica Singelyn.

The BHHS marching band was the last band of the festival to take the field that night as the director Alan Posner announced the Wild West show that the band has been preparing since late July. This year celebrates the 10th anniversary of the Wild West show, which began with the Andover High School Marching Band. The band performed five songs from a variety of selections.

“We had really difficult music this year, probably the most difficult music we have selected in my five years here. [So], that was very challenging. But, the kids really stepped up,” said Posner.

Posner further explained how members of the band stepped up their work ethics, effort, and commitment so that they could present their best work.

“The freshmen didn’t know how to march and two-thirds of the band is ninth and tenth graders, so they’ve really come a long way in understanding how to march and play music at the same time. Band camp started with not being able to move and play at the same time [and now we are] achieving really high scores at Festival, [which is a remarkable improvement]” said  Posner.

Since the majority of the band this year was a combination of freshmen and sophomores, members of the leadership were crucial in the learning process of the show, which is the marching band program’s most difficult show in its six years so far.

At camp, beginning in late July, hours are spent learning each position and move on the field, as well as memorizing the music for each song. This year also featured a choreographed dance during the song “Hoedown,” including hops and spins.

“[The dance] was an excellent way to break away from the typical mold of marching, and it allowed the band to better express the western theme in a fun way that everyone can appreciate,” said sophomore trumpet player Sam Harmon.

“I think we prepared really well for festival. [Everyone in the band] worked hard every Wednesday rehearsal and during every class,” said sophomore mellophone player Maggie Binkowski.

The band earned straight 1s at the end of the night, even though their show was the most difficult performance in the band’s history. Posner noted that the difficulty of this year’s show was necessary for the band to further develop their skills for the future.

“This all builds to what we are looking to next; trying to make the next concert even better and the next performance even better,” said Posner.