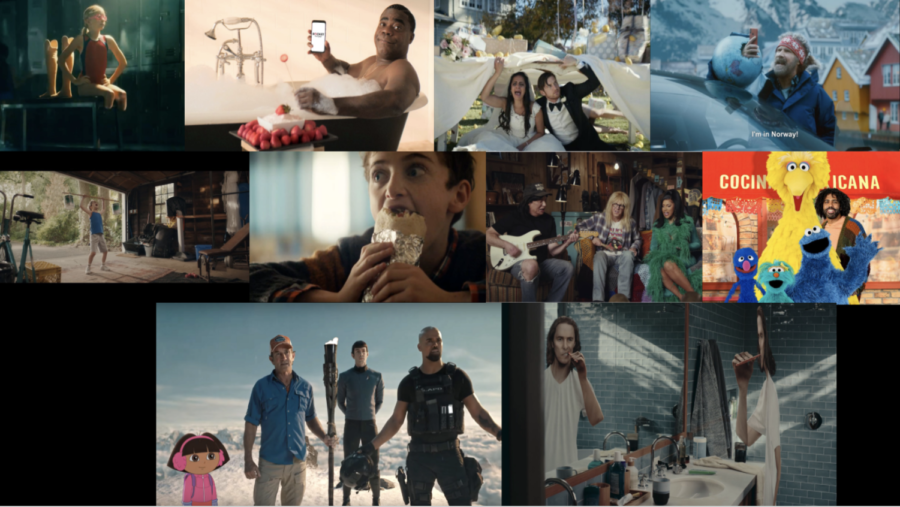 Watching the Super Bowl with friends and family is a long-standing American tradition. Some watch for the sport, some for the halftime show, and then there are the select few of us who watch for the commercials. This year, 5.7 million people streamed Super Bowl LV, and for a 30-second advertising spot you needed, and please prepare yourself for this, at least $5.5 million dollars. If a company is going to invest that much into a commercial, it is almost guaranteed they are going to dazzle and impress. So which commercials in this year’s Super Bowl stood out from the rest? Here are my top ten picks.

Uber Eats: Wayne, Garth, and Cardi B manipulate you.

In the Uber Eats commercial, Mike Meyers and Dana Carvey, A.K.A. Wayne Campbell and Garth Algar from Wayne’s world, claim they would never manipulate you as they shamelessly use every obvious marketing strategy that you can imagine. From infant lookalikes to an appearance from Cardi B halfway through, the commercial is packed with hilarious irony, not to mention the focus on supporting local business. I enjoyed this ad because it was fun and portrayed a meaningful message, which has put it to the number ten spot on this list.

It can be hard to admit when you’re wrong, but it’s a whole lot easier to apologize for it when you can give the gift of M&Ms, at least according to the commercial. The highlight has to be when a man apologizes for mansplaining and proceeds to mansplain what mansplaining is. There is also an appearance from Dan Levy at the end; that man is a national treasure and single-handedly helps the M&M commercial earn the number nine spot on this list.

I am a sucker for puns, and this entire commercial is just one big build-up to a pun at the very end. It starts with a scrawny and nerdy-looking kid watching a professional wrestler talk about becoming the best. We then get to watch a whole “Rocky” style training montage, where he uses items around the house to work out. After all his hard work, the kid stands in front of the mirror and up pops the words, “This might be the year you finally get in shape. Financially, at least.”

“Pretty Sure” with Tracy Morgan

In life, it’s better to be certain than pretty sure, right? Right. In Rocket Mortgage’s series of Super Bowl commercials, Tracy Morgan takes different families on a variety of adventures, each a quintessential example of why you should be certain about things. In one of the minute-long spots, Morgan goes from trying mushrooms that he’s pretty sure aren’t poisonous, to skydiving with what he’s pretty sure are parachutes (children’s backpacks), to running from bears, to convincing some guy to fight David Batista, and more. This commercial was funny, witty, and memorable, and it is definitely worth rewatching.

We’re coming for you, Norway

When Will Ferrell finds out that Norway is ahead of the US in electric vehicle production, he takes matters into his own hands. In an act of true patriotism, Ferrell collects the gang for a trip to Norway, starting with Kenan Thompson, who randomly happens to be dressed as a pirate for his daughter’s birthday party. They head over to Awkwafina’s house, (in separate GM Ultium battery-powered cars of course) who is practicing her archery skills. When Ferrell finally arrives in Norway, he’s pleasantly surprised by the beauty of the country, only to find out that he’s in Sweden. The chaotic energy and classic Will Ferrell moments make this one of the best commercials to come out of this year’s Super Bowl.

Tony Bolognavich, The King of Cold Cuts, is the classic mob boss of the sandwich trade. His empire is threatened when “two first names” Jimmy John comes to town. The commercial plays on Tony accidentally complimenting everything about the new joint. There is a moment of heartbreak when Tony’s right-hand man Stevie gets caught eating a Jimmy John’s sub. They could not have done a better job with casting; Brad Garrett, who plays The King himself, is the perfect choice and plays the part enthusiastically. This one is definitely a different style from the others and provided for a good laugh in between plays.

Everyone remembers Flat Stanley, right? Flat Stanley goes to the moon, Flat Stanley’s Christmas adventures…well this year there was a new flat fellow in town. Matthew McConaughey has gone flat and the only thing that can save him: Dorito’s new Doritos 3D. Of course, before the Doritos turn him back to normal, we get to watch the actor struggle with day-to-day activities like fighting off his Roomba and taking some jabs from Jimmy Kimmel. Overall, I’d say this commercial was all right all right all right.

Since Hamilton came out on Disney Plus, I think I’ve watched the production several…hundred times. Combine my favorite actor from the musical, Daveed Diggs, with my childhood comfort show, and you have yourself a high-ranking commercial on Benji’s Top Ten list. Doordash brings Diggs to Sesame Street to sing/rap about eating local and, not only is the song incredibly catchy, but what puts this over the top for me was DoorDash’s commitment at the end to donate a dollar to Sesame Workshop for every single order placed.

Following Disney Plus, Peacock, Netflix, and more, Paramount Plus is the newest streaming service to come along. And what better time to debut than the Super Bowl ad breaks? They came out with a series of commercials throughout the game where the stars of the service’s shows traverse a journey to reach the top of Mount Paramount, all leading up to the pinnacle at half time where, well, they reach the pinnacle. And who is there to greet them other than Sir Patrick Stewart and Steven Colbert? The series is hilarious and definitely worth a rewatch, even if only to see your favorite stars of your favorite TV shows.

Toyota took a unique approach with their commercial with a piece that pulls on everyone’s heartstrings. It starts by showing the thirteen time Paralympic gold medalist Jessica Long floating in the water. A mother gets a call from the adoption center while sitting at her desk that is half-submerged in the water. The voice on the other side informs her that there is a child available for adoption, but no matter what, her life is going to be a challenge. All the while, Jessica is swimming in the water, past her mother’s desk, through the nursery, and then past her childhood home. She passes the pool locker room where a young Jessica is putting on her goggles for the first time. She swims down her lane and every time she takes a breath, more and more people are there to cheer her on until she reaches her kitchen once more, where she hears her mother excitedly accept the opportunity to adopt. The emotion, the quality, the story, all comes together to create a truly inspiring commercial.